When I was in Bali, lovely accompanying my nephews watching television at the night, and we found an interesting animated show on TPI – called “Little Krishna – Darling of Vrindavan”. Well, it was the second animated series that TPI brought to public after Upin and Ipin’s series. We were so enthusiast watched them over and over.

If you ever read the Mahabharata comic by RA Kosasih, and watching this animated serial, it must be a good complement for the avatar’s childhood stories. As one of ten avatar, Krishna (or perhaps some would say Lord Krishna) were thought to be lived around 6000 B.C., when the Hastipur still exist as the greatest kingdom in the middle earth.

I found some of stories were contradicted from what I ever heard or read somehow. Well, Mahabharata and the life of Krishna itself has been have so many versions around the globe. I feel the story were give more weight to Vaishnavism side, a sampradayas that worshiped Lord Vishnu as the Supreme One.

Little Krishna is a 3D computer-animated series which is a co-creation between BIG Animation and The Indian Heritage Foundation (promoted by ISKCON, Bangalore). The series is all set to grace the Indian television on Nickelodeon from 11 May, 2009.

ISKCON (International Society for Krishna Consciousness) is one of the biggest Hindu Vaishnava religious organization which is founded by A.C. Bhaktivedanta Swami Prabhupada (even tough Prabhupada never declared ISKCON to be a Hindu organisation, because he considered it to be a 'material designation', not an appropriate name).

So back to Little Krishna animated series, I never care much about contradiction in all stories that the world has, but enjoying the movie itself were amazingly fun and joyful. It is a good movie for family, don’t you thing so?

Yesterday I found some “funny” question on the net, “why Little Krishna look familiar with the avatar character by Cameron Diaz?” – I was laughing by myself, and said alone “Well, He is an avatar, what else would you expect?” – I think people on this country no longer interesting in his/her own culture, like attending Wayang show, traditional Sendratari or something like that. Ah…, quo vadis my young generation? 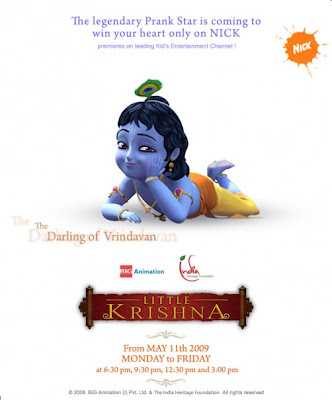 Email ThisBlogThis!Share to TwitterShare to FacebookShare to Pinterest
Label: Pilgrims

We try to make this site secure. But if you need extra security for your Windows PC or Android Smartphone, please consider using avast! antivirus.

A writer, tea addict and peotry lover. Writer of Bhyllabus and Manvahana